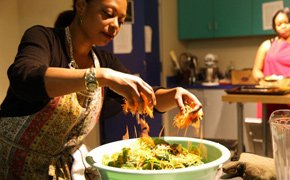 50% of African American youth, 33% of Latino youth and 25% of white youth born in the year 2000 will get type 2 diabetes in their lifetime

Type 2 diabetes accounts for 95% of all diabetes cases. It used to only be found in adults but has rapidly increased among young adults and children, especially in urban and poor neighborhoods, and communities of color.  50 years ago, the average American consumed about 20 lbs of sugar and corn sweetener in a year, now that number has risen to almost 130 lbs.  Since the start of the U.S. wars in Iraq and Afghanistan over 1000 Americans have all or part of their leg amputated due to injury. In that same time period, over 70,000 Californians have had all or part of their leg amputated as a result of diabetes. Living in a low income neighborhood with limited access to healthy food increases one’s chance of getting diabetes by 20%.

From 1978 to 2009, the price increase for fresh fruits and vegetables was much more significant than the price increase for sugars, sweets, and carbonated drinks. High sugar consumption has been associated with diabetes.  The food and beverage industry in the U.S. spends almost $12 billion a year (one million dollars every hour of every day) targeting people to buy unhealthy food.  From 2008 to 2010, children’s and teens’ exposure to full-calorie soda TV ads doubled.  Companies are particularly targeting black and Latino children and youth for high-sugar foods and drinks.  Black children and teens saw 80 percent to 90 percent more ads compared with white youth, including more than twice as many for Sprite, 5-hour Energy, and Vitamin Water.

Behind The Bigger Picture Campaign

Dr. Dean Schillinger the Principle Investigator of The Bigger Picture Campaign and poets who have contributed to The Bigger Picture public service announcements  talk about their inspiration for educating young people on the social determinants of diabetes.

Sugar in Drinks and Salt in our Food: Why You Should Care

Jade Cho leads the Bigger Picture Poets in a collective pledge of commitment to ending this epidemic and challenging the systems and institutions that support its growth and spread.

Erica Shepperd’s, emotionally gripping poem, “Death Recipe,” begins with the refrain, “We eat like we’re still slaves.” Erica then describes the nutritional content of widely available junk foods in her neighborhood environment and her home, her ambivalence toward her young body and the functional limitations she now has as a result of her weight, her “addiction” to these sugary foods, and the connections between emotional and social trauma, corporate greed, and unhealthy eating. The poem culminates in a haunting catalogue of the clustering of early onset Type 2 diabetes in her family, and the resulting morbidity and mortality, ending with the final words, “…it’s like suicide.”

Jose Vadi explores how dependent we all are on our feet and asks the question what would we do if we lost all or part of one? Caution: This video contains very strong images.

Robin Black discusses the way in which people are farmed by being fed industrialized food.This punishing monologue provides insight into the relationship between the food industry and sickness.

Jose Vadi illustrates the choice people make and questions whether or not we are actually making a choice or whether choices about what to eat are made for us by forces beyond our control.

Joshua Merchant tells a personal story about his fathers relationship to Type 2 Diabetes, and its impact on family, and his own future.