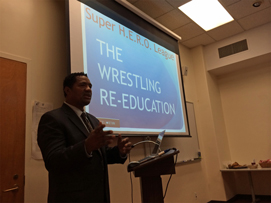 A replica of the Super H.E.R.O. League is being employed in Africa today.

South Sudan, the newest country in the world employed a wrestling league to address tribal violence. As a result, tribes who were raiding each other's villages for cattle and killing each other, are visiting each.other. Wives whose husbands were killed in previous raids are cooking for previous enemies. The wrestling company was started by a former member of the "Lost Boys of Sudan" who received asylum in America and graduated from Harvard's Kennedy School of Government.