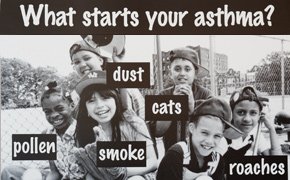 Asthma is on the rise in the U.S.

The percentage of people with asthma has been increasing in the past decades. 40 million people in the United States have had asthma and Asthma is most common among those aged 5-17 (9 million are affected).  While 5-17 year-olds make up 18% of the population, they represent 23% of people with asthma.

Asthma is one of the leading causes of days missed in school. In 2008 nearly 14 million school days were missed by children with an asthma attack in the previous year.

Early life exposure to NO2 , most commonly sourced from car exhaust, is associated with asthma.  There may be genetic, socioeconomic, or behavioral traits that make minorities more susceptible to pollution induced asthma. African Americans and Puerto Ricans die from asthma at nearly 3 times the rate as Whites.

A family history of asthma along with environmental factors such as house dust and mold, air pollution, roaches, and furry pets can be a trigger for asthma. Sociobehavioral issues such as exposure to cigarette smoke increase asthma risk and can exacerbate its severity.  Being around smokers (in the home, in the car, or wherever you spend a lot of time) increases risk for asthma and asthma exacerbations.  Mothers smoking during pregnancy in-crease the risk for asthma and asthma exacerbations in their unborn child.  Low income and low education are both risk factors for asthma.

Genes and Health—Moving Beyond Race

Created by the American Museum of Natural History (AMNH) in NYC, on display for two years and available to all public high schools in the U.S., the Genes and Health--Moving Beyond Race video features CHARM investigator Esteban Burchard's lab.